Film / Radar Men from the Moon 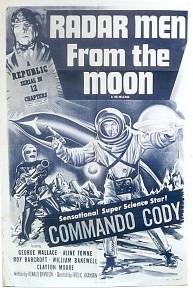 Radar Men from the Moon (Republic Pictures, 1952) is the first Commando Cody Film Serial note  although not the first "Jet Pack" serial; that would be 1949's King Of The Rocket Men, in 12 chapters.

With the Moon's atmosphere growing thinner and less capable of sustaining life, the titular Radar Men have decided to forcefully relocate to Earth. To this end, they hire a pair of human henchmen, hand them some advanced weaponry and set them to work softening up Earth's defenses and infrastructure in anticipation for the impending invasion. It's up to professional hero (and Jet Pack trustee) Commando Cody and his small team to stop the threat of the evil Moon King Retik and his unscrupulous underlings.