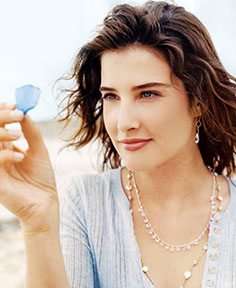 Jacoba Francisca Maria "Cobie" Smulders (born April 3, 1982 in Vancouver, British Columbia) is a Canadian actress best known for playing Robin Scherbatsky on the hit sitcom How I Met Your Mother and S.H.I.E.L.D. Agent Maria Hill on the Marvel Cinematic Universe. She also portrayed Wonder Woman in The LEGO Movie, the first actor to do so in a feature film.note Gal Gadot is the first to do so in a live-action film.

She is married to Saturday Night Live cast member Taran Killam. Coincidentally, they were born in the same year and month, two days apart (Killam was born before Cobie on April 1st). They have two children.