It's a Small Net After All 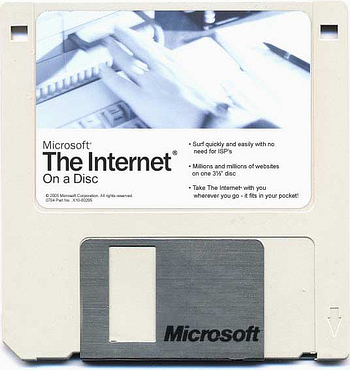 Okay, maybe not that small...
Advertisement:

Even though the Internet has technically (kinda, sorta) existed since the 1960s, not everyone foresaw the impact it would have. And writers still seem to have trouble getting their heads around it.

One result is that it is totally absent from many shows set 20 Minutes into the Future.

Another is that TV shows never seem to really grasp just how big the Internet is.

Another is that there is exactly one instant messaging service. And everyone is a subscriber. And everyone knows everyone else's handle. You can message anyone you want at any time without having to sign up for a new service or even search for their screen name.

And speaking of screen names, everyone gets something short, pithy, relevant, and unique. No one is ever "JAnderson789" or "buffyfan2001". Even if you want a short, really hip handle, it will be available as if it were reserved for you. And no one names themselves after characters from other TV shows. Also, everyone has exactly one online identity, which is their email address, instant messaging handle, their handle on every bulletin board, the underground identity by which they're known in the illegal hacking community, and the name they use on Usenet (caveat: Usenet never actually exists on TV, except for alt.nerd.obsessive. Or alt.conspiracy.black.helicopters). You'll never run into someone who uses the same handle as you on a different service (There is, after all, only the one service. In TV Land, AOL is, as they claim, the Internet). Email addresses rarely include a domain name.

Compare Acquainted in Real Life, a "small net" may be the reason these two people find each other again online.