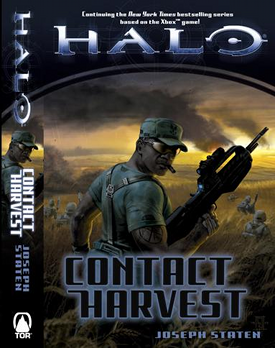 Halo: Contact Harvest is a 2007 Halo book. It details the events surrounding Humanity's First Contact with the Covenant and the beginning of the Human-Covenant War, and gives backstory for several characters from the original FPS trilogy. It was written by Joseph Staten, one of the main writers of the Halo games themselves.

As the United Nations Space Command sends Staff Sergeant Avery J. Johnson to the distant colony of Harvest to help train its Colonial Militia to battle the Insurrection, a Covenant scout ship discovers the planet, with their scans indicating that Harvest is full of Forerunner artifacts. As the UNSC tries to deal with the possibility of an alien invasion, two Covenant Prophets plan to use the relics' discovery to inaugurate a new Age of Reclamation with themselves as Hierarchs. But what they discover will end up radically changing the course of both civilizations.