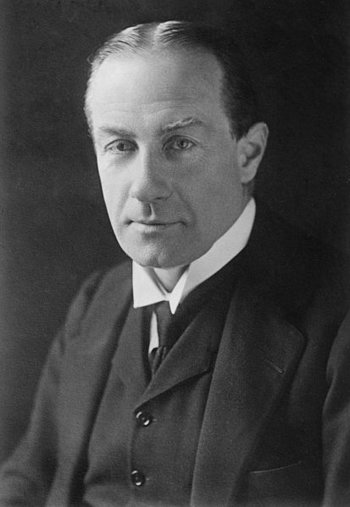 He first became prime minister when his predecessor, Bonar Law, was diagnosed with cancer and retired. Most of the actual candidates whom people would have expected had been isolated from the government, leaving only two candidates; Viscount Curzon (the Foreign Secretary) and Baldwin (then Chancellor of the Exchequer). The choice formally fell to King George V acting on the advice of senior ministers and officials. This had mostly been a formality in previous decades, as typically a retiring Prime Minister would decide on his successor and recommend that the reigning monarch appoint them, which they almost always did.note (The most recent exception being when Queen Victoria disregarded William Gladstone's advice on his favoured successor and instead appointed the unpopular Earl of Rosebery as PM in what many felt was a transparent — and ultimately successful — ploy to make the Liberals lose the next election) However, Bonar Law was too ill to advise King George, thus leaving the monarch with the final say; the last time to date this has happened.

The king turned to Baldwin to become prime minister, setting a precedent which continues to this day; no subsequent prime minister has come from the House of Lords (Sir Alec Douglas-Home, a future Tory leader, would renounce his peerage and stand for a Commons seat when he was called to the palace). Neville Chamberlain, then a minor cabinet minister barely off the backbenches, was recruited to replace Baldwin at the Treasury.

Despite having five clear years ahead of him where he could do almost anything he wanted, Baldwin remained bound to the previous PMs promises on not introducing tariffs until after the next election. The problem was that unemployment was growing and new tariffs would have been the ideal way to help create British jobs. So Baldwin called a general election and, whilst he won the most seats, he lost his majority and lost a no-confidence vote. He resigned immediately but held on as leader of the party in opposition.

The general election held in October 1924 brought a landslide majority of 223 for the Conservative party, primarily at the expense of the now terminally declining Liberals and the Labour approach to the Soviets.

His new cabinet was full of David Lloyd George's old guard. There were big problems, including the General Strike of 1926, a crisis that the government managed to weather, despite the havoc it caused throughout the United Kingdom. Baldwin got the middle and upper classes to volunteer to take over the essential jobs and managed to force the workers to back down. He also set up the precursor of the modern National Grid and the United Kingdom had the fastest uptake of electrical power in the world. Women in the UK were finally given the right to vote on the same terms as men. However, problems worsened, including poor management of the Gold Standard, and he lost the next election to another minority Labour Government. In fact he managed to get more votes, but fewer seats than Labour. He then nearly got thrown out of his party by insulting several of its most prominent members.

By 1931 Baldwin entered into a coalition with Labour Prime Minister Ramsay MacDonald. This led to MacDonald's expulsion from his own party. Baldwin, as Lord President of the Council, became de facto prime minister deputizing for the increasingly senile MacDonald, until he once again officially became prime minister in 1935. His government then secured with great difficulty the passage of the landmark Government of India Act 1935, in the teeth of opposition from Sir Winston Churchill, whose views enjoyed much support among rank-and-file Conservatives.

Baldwin then pushed for disarmament in 1932, and started re-arming in 1934. He did not worry too much about the size of the German forces however, feeling that the Nazis were reasonable men who could be negotiated with. In 1935 he swapped positions with MacDonald, becoming Prime Minister again, however rather than focusing on rearmament like Neville Chamberlain advised, Baldwin threw himself behind the doomed League of Nations, saying, "I give you my word that there will be no great armaments". Winston Churchill attacked him publicly and Neville Chamberlain pushed him to rearm, but besides an expansion of the RAF, nothing really got done.

Took much the same approach to dealing with The Great Depression as American president Herbert Hoover, namely sit back, do nothing and wait until the problem fixes itself, to the point of openly dismissing unions as "troublemakers" and refusing to even publicly acknowledge the Jarrow Marchers, a group of unemployed shipbuilders who marched a distance of 300 miles from their town to London. Unlike with Hoover, however, the National Government held such a big majority that even a backlash against it in the 1935 election only reduced its majority from "absurdly huge" to just "huge." These policies would eventually come back to bite the Conservatives on the butt in the long run, however, and played a big role in Clement Attlee's election in 1945.

Perhaps best known for being PM during the Abdication Crisis of 1936, where, unsurprisingly, he sat back, did little, and earnestly hoped Edward VIII would come to his senses. When push finally came to shove, however, it was Baldwin informing Edward that he (along with the entire government) would be forced to resign if the king chose to marry Mrs. Simpson, that led the king to realize his only option was renouncing the throne.