Film / In the Realm of the Senses 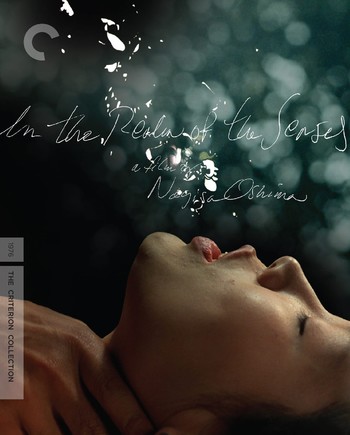 Ai no Korīda (愛のコリーダ), known as In the Realm of the Senses in English and L'Empire des sens in French, is a 1976 Franco-Japanese pornographic arthouse romance/drama film directed by Nagisa Oshima.note Iron Chef fans: Yes, this is the same Nagisa Oshima who later appeared semi-regularly on the original ICJ as a judge, usually dressed in a kimono and waxing philosophical about food.

, who infamously strangled her lover before cutting off his genitals and carrying them around in her handbag, thus becoming a cultural icon. Set in Tokyo in 1936, Sada is played by Eiko Matsuda. Sada is a former prostitute who gets employed as a maid in a hotel. She begins a torrid affair with the hotel's owner, Kichizo Ishida (Tatsuya Fuji). The two engage in various sex games, including slapping each other, Kichizo urinating inside her, and Kichizo having sex with an old woman who comes to play music for them in front of her. Alas, Sada grows jealous of Kichizo's ongoing sexual relations with his actual wife, insisting that he should love only herself. Eventually, with his encouragement, she erotically aspyxiates him and cuts his genitals off so she can keep them inside her forever; with the film concluding with her painting "Sada Kichi the two of us forever," in blood on his chest.

Because bans in Japan on depictions of genitalia would have prevented Oshima from completing the film to his vision in that country, the production was officially listed as a French enterprise, and the undeveloped footage was shipped to France for processing and editing. The film does not so much examine Abe's status as a folk hero in Japan (although there were several Japanese films made exploring this topic before and since), but rather the power dynamics between Abe and Ishida. Many critics have written that the film is also an exploration of how eroticism in Japanese culture is often morbid or death-obsessed.