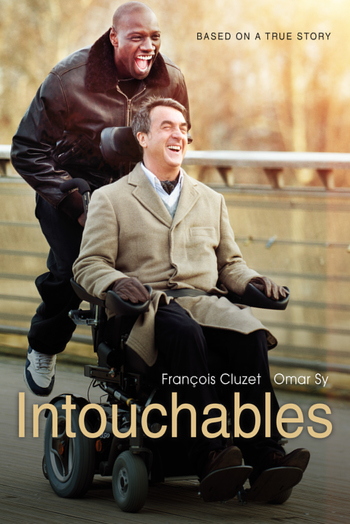 Intouchables is a 2011 French dramedy film, directed by Olivier Nakache and Éric Toledano. It depicts one very unorthodox patient/caregiver relationship, and is Based on a True Story.

Meet Driss (Omar Sy) —young, obnoxious, shamelessly living on welfare and freshly back on the street after six months spent... elsewhere. With little ambition and even fewer employment prospects, he crashes a job interview for the position of stay-at-home nurse for a wealthy tetraplegic aristocrat, simply wanting them to acknowledge his attendance and rejection so he can remain on benefits.

But when Philippe (François Cluzet), the tetraplegic in question, takes a shine to Driss' blunt and pitiless demeanour in front of him and his bedside manners that would make Gregory House proud, he decides to hire Driss on trial, betting that "he won't last two weeks". Hilarity Ensues.

The film ended up the second most successful film ever at the French box office. The Weinstein Company distributed it in the US, with less than memorable resultsnote Less than 19000 spectators, vs. over 19 million in Europe, but that didn't prevent the film from getting an americanized remake. Titled The Upside, the remake came out in 2019, starring Bryan Cranston and Kevin Hart in the lead roles, which had reverse popularity - commercial success in the US and a bomb everywhere else.

Not to be confused with The Untouchables.