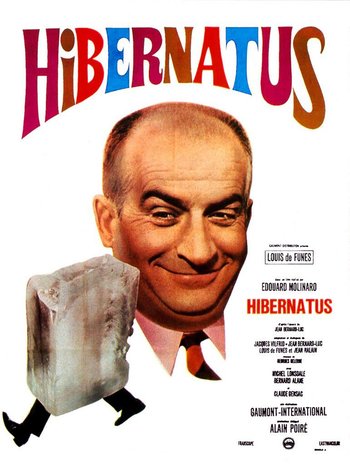 When cryogeny was Older than You Think
"Say... What if we bluntly and all of a sudden telling him in which time we are. It would make savings!"
— Hubert de Tartas (for dealing with the Human Popsicle)
Advertisement:

Hibernatus is a 1969 French comedy film. It was directed by Édouard Molinaro and it stars Louis de Funès, Claude Gensac and Michael Lonsdale.

A polar expedition discovers a human body in the ice. It turns out that it is possible to bring him back to life. He is identified as Paul Fournier, the grandfather of Edmée de Tartas (Gensac) who disappeared 65 years ago. The doctors who treat him think that they cannot tell him the truth, because this would be a great shock for him, so they tell him that he has woken up in 1905.