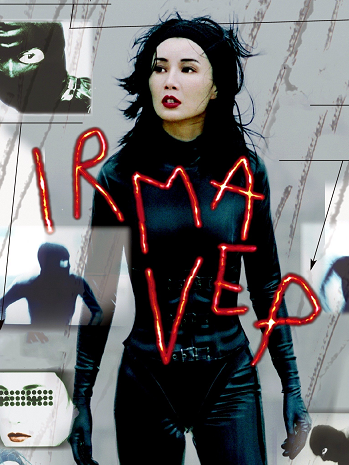 The story is about a contemporary attempt by René Vidal, a washed-out French director (played by former Nouvelle Vague actor Jean-Pierre Léaud) to shoot a remake of Les Vampires, a 1915 silent film serial by Louis Feuillade, depicting the adventures of a gang of thieves led by a Femme Fatale who went by the name of Irma Vep (anagram of Vampire). The movie is being made on a shoestring, the crew are a squabbling bunch and nothing goes right. In the middle of it all arrives the Asian star chosen for the lead role, Maggie Cheung — played by Maggie Cheung.

Maggie doesn't speak French and is quite surprised by the lack of organization, in stark contrast with the no-nonsense professionalism she's accustomed to from the Hong Kong movie scene. She nonetheless tries her best to follow the director's obscure instructions, and things begin to fall into place. Her part requires her to dress up in a fetish rubber bodysuit with built-in corset, which she develops a certain fascination for, and at one point puts it on to become a real-life cat burglar for a night.

However, just as it seemed that the movie could be finished in spite of everything, the director has a nervous breakdown and is replaced by another one, whose first decision is to remove Maggie Cheung from the cast. All that's left of the first director's work is a surrealistic montage of scratched rushes.

Fittingly for a film about shooting a remake, an American Mini Series remake of the film, also by Assayas, was announced for a June 2022 release on HBO Max. Alicia Vikander stars as Mira, the American actress tasked with playing Irma.

Compare Day for Night, another film about a movie and its Troubled Production that also starred Jean-Pierre Leaud.