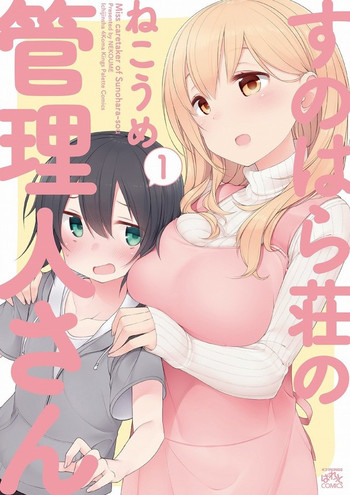 Miss Caretaker of Sunohara-sou (すのはら荘の管理人さん, Sunohara-sō no Kanrinin-san) is a manga series by Nekoume. It centers around Aki Shiina, a boy who constantly gets mistaken for a girl and transfers to Tokyo to reaffirm his masculinity. But due to his feminine looks he gets mistakenly put in a girl's lodging house called Sunohara-sou. He quickly develops a crush on the Sunohara-sou's caretaker, Ayaka Sunohara, who acts like a motherly Cool Big Sis. He's also constantly at the mercy of the other girls living there and put him in embarrassing situations.
Advertisement:

The series is serialized in Ichijinsha's seinen manga magazine Manga 4-Koma Palette since 2014, and has also been collected in three tankōbon volumes. An audio drama was released on July 22, 2016, and an anime series was created by Silver Link and began aired on July 5, 2018.