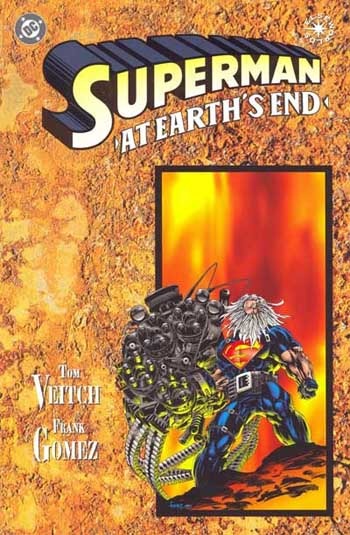 "Reality is: you are an android. I AM A MAN!"
— Superman, while punching Ben Boxer in the gut with enough force to smash a hole through Ben
Advertisement:

Superman: At Earth's End is an Elseworlds one-shot from 1995, written by Tom Veitch and drawn by Frank Gomez.

It's the 22nd century. Earth has passed through two apocalypses (one occurring in the predecessor, Kamandi: At Earth's End note a gritty reboot of a Jack Kirby character who lived in a post-apocalyptic Earth). A group of emotionless, logical cyborgs named the Biomech Sevens are overseeing Earth's return to greatness. For the last year, Superman has been regaining his lost strength in a hovering city, where he is able to receive the benefits of the sun's rays. While recuperating, he learns that Gotham City is next in line to be "cleansed", via a nuclear bomb. It has been overrun with mutants and other such degenerates.

After battling the Biomech Sevens' leader Ben Boxer, Superman goes down to Gotham, where he is attacked by bat-like mutants that bear a striking resemblance to the Dark Knight and is saved by a mohawked youth biker gang, and finds that the underground of the city houses a fortress where the evil DNA Diktators, who kidnapped the gang's parents and took Bruce Wayne's body from his manor. There he meets the leaders of the Diktators: twin clones of Adolf Hitler!

If you frequented the internet during the late 2000s/early 2010s, you're likely aware of the comic from Linkara's Atop the Fourth Wall review of it, the story being one of his earliest video reviews; it can currently be watched here

. The reviewer went on to take one of his catchphrases from the comic ("I AM A MAN!" *punch*) and make a Running Gag of the twin clones' declaration "Of course! Don't you know anything about science?"

"Of course! Don't you know anything about science?"