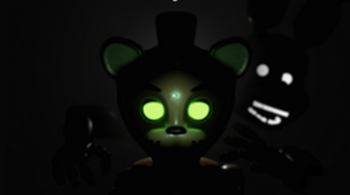 Are you disposed to play POPGOES?
Advertisement:

In the year 2023, Fazbear's Fright, an attraction at an American amusement park based on the late 20th century pizzeria chain Freddy Fazbear's Pizza, once well-known for its revolutionary animatronics but more infamous for its mysterious incidents involving the unsolved kidnapping of several children, a patron suffering a partial lobotomy and the disappearance of several night-time staff members, burned down mere nights before it was due to open to the public. An auction was held to sell off the few intact remnants of the disaster, salvaged from the derelict pizzerias that had closed more than three decades prior.

Fritz, a middle-aged man who had once worked at one of the restaurants in his youth, briefly returns to America from England after having learned about the fire and finds himself inspired to create his own establishment with a similar theme. A year later in 2024, Popgoes' Pizzeria opens its doors in an unspecified part of England, and you are in charge of watching over the restaurant during the night.

POPGOES is a video game by Kane Carter based on the Five Nights at Freddy's series of games by Scott Cawthon. Originally announced shortly after the release of Five Nights at Freddy's 3, the game became notable for featuring a team of developers from across the globe and was eventually released on June 26th, 2016, 20 days after its original planned date following several programming setbacks.

Akin to its source material, POPGOES is a point-and-click strategic horror game where the player assumes the role of the night guard at Popgoes' Pizzeria, trying to survive six nights at the restaurant from 12 to 6 by defending themselves from the animatronics that provide the main source of entertainment at the joint, utilizing the security cameras in the building to monitor them as they move around and manipulate the machinery in an attempt to render the player defenseless before making their attack. The game can be found and downloaded from its official Gamejolt page here

On October 30th, 2016, Kane revealed a new teaser during Dawko's Five Nights at St. Jude's Steam, confirming the existence of POPGOES 2. He has stated that the game would have an entirely new team and it's being made to "redeem" the blatant mistakes that was made in POPGOES. However, on November 29th, Kane announced that the sequel to POPGOES had been cancelled. His explanation can be found here

. Kane plans to reveal what was originally planned in the future for the scrapped sequel. Over the years, three spin-off RPG games were released by the name of POPGOES Arcade, one released in 2016 that acts as a prequel to the original, a sequel released in 2018 that would have taken place between the mainline POPGOES 1 and 2, and a remake of Arcade 2016 released on 2020 that acts as a teaser for (fittingly) the reboot of the series.

On April 1st, 2020, Kane announced that he would be rebooting the series with a new game known as POPGOES Evergreen, with the all-new character and location designs, as well as a new plot and gameplay. The game is expected to be released in 2021. It can be found on its Gamejolt page here.

On August 21st, 2020, Scott Cawthon, creator of Five Nights at Freddy's, announced that Kane had been invited to join the Fazbear Fanverse Initiative project, which gave him official permission to port Evergreen to console and mobile devices and sell merchandise related to the POPGOES series, as well as giving funding to develop Evergreen.