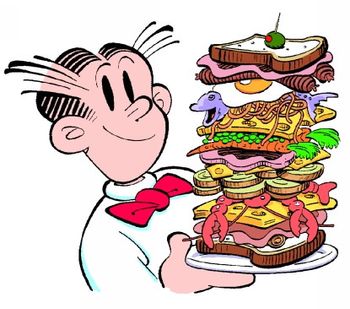 You know, those ludicrously tall sandwiches that a Big Eater makes. Often in Western Animation a common gag will be for a character to distend his jaw like a snake and swallow it whole, only for it to expand and leave his neck in the shape of the towering sandwich. Another possibility is for a character to take two or more already made sandwiches and 'shuffle' them together like a deck of cards, creating this. Yet another is to make the sandwich and then just as implausibly squeeze it down to a more normal size and then eat it; the Dinner Deformation mentioned above is optional here.

As the page image demonstrates, these often have an olive and toothpick in the top, ostensibly to hold the massive stack together. In animation, (Garfield notably) the sandwich will be consumed in one gulp without removing said toothpick, since the character's mouth can get as big as it needs to be. Don't try THAT at home.

The name is commonly believed to have originated with Dagwood Bumstead from the newspaper comic strip Blondie, the character being famous for making a sandwich by filling an entire, long bread stick often referred to as a French Loaf note A baguette in common tongue. with various ingredients, hence this trope can also apply to ridiculously long sandwiches as well as to ridiculously tall ones.