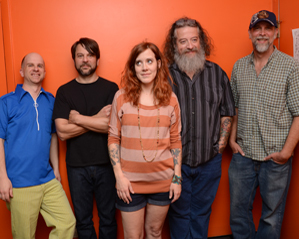 Wussy are an Alternative Country/Rock band from Cincinnati, Ohio.

The band was formed in 2001 when Chuck Cleaver, who was leading another band, was asked to sing at an awards show. He invited Lisa Walker, a musician he had recently met, to sing with him, and the two enjoyed the experience enough that they decided to continue to sing together. They soon recruited other members and eventually released their first album, Funeral Dress in 2005.

The songs are primarily written by Cleaver and Walker, who sing them either separately or in harmony. Their lyrics tend to be quite dark, displaying a pessimistic view of the world and often focusing on failed relationships. Musically, they are probably most notable for their use of dual guitars.