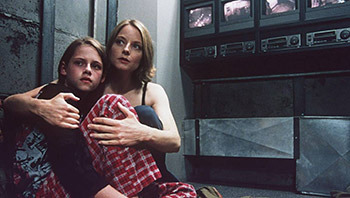 Raoul: Hey! What is funny about this?... Is this shit funny to you?
Burnham: Well, I spent the last 12 years of my life building these rooms specifically to keep out people like us.
Advertisement:

Recently-divorced Meg Altman (Foster) and her 12-year-old daughter Sarah (Stewart) move into a four-story Manhattan brownstone which has a fortified "panic room" in case of home invasion. Late at night, three burglars — Burnham (Forest Whitaker), Junior (Jared Leto), and Raoul (Dwight Yoakam) — break in looking for money hidden in the house by the previous owner.

The two women lock themselves up in the room, but are unable to call for help. Worse yet, the money was stored in the panic room and the burglars have no issue going through the new owners to get it (also, originally unbeknownst to them, it was far more than they had been told it was, and in the form of bearer bonds).