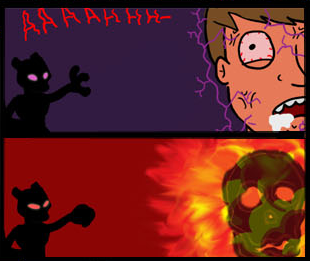 "Mewtwo is too dangerous to be allowed to run wild. He must be stopped."
Mario: Mama, you know who you're talking about. You know what he's done.
Luigi: If he had the chance he'd kill you for fun and dance around in your skin! He's a monster!
Peach: A psychopath! A cannibal! I haven't forgotten...
—Mario and Luigi warning Peach about interrogating Kirby, There Will Be Brawl

Countless Fan Works have equally countless villains. Here are the worst, whether already canon or an Original Character.

Examples with their own folders

A Song of Ice and Fire franchise (literature & television)

A Song of Ice and Fire
Game of Thrones