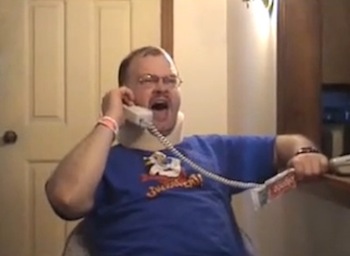 on IMDb sums up the Tourettes Guy's life perfectly
Advertisement:

The Tourettes Guy is a series of YouTube videos following the eponymous Danny, a foul-tempered and foul-mouthed man with "Tourette's syndrome" — though his behavior is likely more influenced by all the booze he drinks. His friends and family often show up, but aside from his equally foul-mouthed father, they are only heard from offscreen and never seen.

The first video of Danny surfaced in December 2000, when a 25 minute videotape was given to a small number of people in the Columbus, Ohio area (where the series is based). The series then made the jump to the internet in 2002 on the website Elbow World, run by the series' creator and camera operator Jared Six. These videos came under the title “Tony the Tiger With Tourette’s Syndrome” and fictitiously described Danny (at the time unnamed) as "the guy that used to do the voice" of the eponymous Frosted Flakes mascot before retiring to live off residuals. For years the videos circulated amongst a dedicated fanbase until September 2004, when the fan site TourettesGuy.com was formed and eventually became the main source for Tourette's Guy episodes. From November 2004 to October 2006, episodes with new content were added every few months. After a brief hiatus, three new episodes were added between January and May 2007. Throughout those years, fans began uploading the episodes on the then-fledging YouTube website, causing the popularity of the series to explode to new heights and becoming one of the site's first videos that went viral.

that Danny had died from injuries sustained from a car accident. After an outpouring a grief, as well as a DVD remaster of the 2004-2007 webisodes, rumors and speculation regarding Danny's true fate began circulating, with many claiming that he was still alive and that his "death" was a publicity stunt. Then, between Christmas 2009 and Christmas 2010, 3 new videos were posted, and his website claimed that he had just been in jail the whole time. New videos were posted on Christmas 2012, Halloween and Christmas 2014, April Fools 2016, Christmas 2017 and Christmas 2020. Patience is a virtue when it comes to waiting on new developments of the ever-impatient Danny.

The Tourettes Guy provides examples of:

"HOLY SHIT!!! I gotta go! Some squirrel's fucking my tomatoes!"