Web Video / That Dude in the Suede 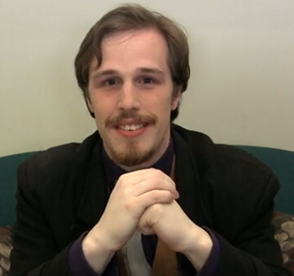 "Anime may still be classed in the 'niche' market these days, but it has such variety, such potential, that I'm sure it will make it into the mainstream one day."
— That Dude in the Suede, 2008
Advertisement:

William DuFresne is That Dude in the Suede, a laidback, sardonic otaku in a leather jacket who hails from Christchurch, New Zealand and reviews anime and anime-related things. He was one of the first people to join Channel Awesome, as well as that site's first anime critic. He was also the first to leave the site, disappearing in 2009 to go on a mission with his church, and returning mid-2011 in the midst of the site's third anniversary special.

He got his start as an AMV-maker before turning to anime reviews in blatant emulation of The Nostalgia Critic, whom he defended on his YouTube channel after Doug Walker lost his. He was swiftly added to the site when Doug found his knowledge of anime was minimal compared to that of the fans demanding anime reviews.

During his initial run, he (like most reviewers) had a distinctive set and uniform, a brown suede jacket worn at his kitchen table, backed by pink drapes. Since his return, his set has been swapped to a living room armchair and his old jacket replaced by a full black suede suit.

He hosts a variety of shows, which are as follows:

You can see his reviews on his official blog, Days Of Suede

, and find his AMVs on multiple

as well as at this site here

As of March 2018, Suede has left Channel Awesome again.