Literature / Fate of the Jedi 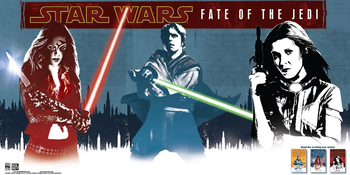 "You're wrong! You have made your own Order vulnerable. The fate of the Jedi now rests with leaders who are weaker and less experienced than you. That decline will continue until the Order is locked in a hopeless struggle with its government and all but helpless. Then it will die again."
—The Hidden One

Fate of the Jedi is a nine-book novel series in Star Wars Legends, set about two years after Legacy of the Force. Like that series, it was written by three rotating authors: Aaron Allston, Christie Golden (who replaced Karen Traviss after she dropped out), and Troy Denning.

A Long Time Ago, in a Galaxy Far, Far Away... Jedi started suffering from the same psychosis

, and lashing out with The Force. At the same time, rumors developed of a new breed of Sith emerging into the galaxy, poised to conquer (as usual) and generally cause problems. Our hero, Luke Skywalker, was basically unable to stop any of this, and public opinion swung against the Jedi in general, to the point where he was exiled from Coruscant; however, this dovetailed neatly with the fact that someone needed to investigate these new Sith. As he and his son Ben traveled, they experienced continued run-ins with Vestara Khai, a Sith apprentice with definite chemistry with Ben, and evidence that there was something deeper and darker than them—an Eldritch Abomination that could spell doom for the entire galaxy...

This is the final major story arc for the Expanded Universe before it was decanonized by Disney and converted into the Legends brand. It is followed by Star Wars: Crucible.

Tropes used in the novels: