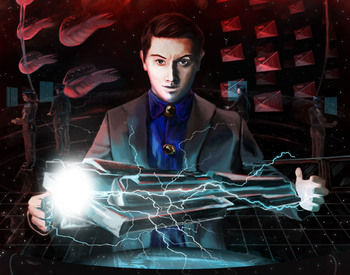 No one on this planet really knows what it means for a Hand to go to war.
Advertisement:

Starship's Mage is a Science Fantasy Space Opera series by Glynn Stewart. The first book, Starship's Mage: Omnibus was originally published as a series of five novellas following the young mage Damien Montgomery as he goes from a nobody with no family connections to a fugitive on the run from one of the Mage-King's "roving warrior-judges" to one of the most powerful mages alive and a student of the Mage-King himself. The second through fifth books, Hand of Mars, Voice of Mars, Alien Arcana, and Judgement of Mars follow Damien as judge, jury and executioner, as he completes regime-toppling troubleshooting missions for Mage-King and Protectorate.

Stewart has described the series as The Dresden Files meets Miles Vorkosigan, with magic taking the place of the usual hand-wave that accompanies faster-than-light travel in science fiction.

A spin-off trilogy featuring the adventures of David Rice and the crew of the Red Falcon following the events of Starship's Mage and the subsequent interest the mob, the Legatans, and the Protectorate all have in him, much to his own chagrin.

Tantor Media began publishing an Audiobook adaptation of the series in 2015, narrated by Jeffrey Kafer. As of the Unarcana Rebellions trilogy, the audiobooks are now being done by Podium Publishing with Jeffrey Kafer still narrating.