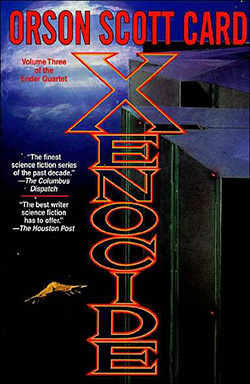 The sequel to Ender's Game and Speaker for the Dead, published in 1991 by Orson Scott Card. Followed by Children of the Mind.

After the events of Speaker for the Dead, the human colony on Lusitania has cut ties with Starways Congress and is living openly with the Pequeninos and newly resurrected Formics. Not liking the rebellion and fearing that the deadly Descolada virus native to the planet might get off world, the Congress launches a fleet with the Little Doctor device on it. Ender and his friends have to stop the fleet from bombing Lusitania, eventually, in the next book. Plus other subplots.