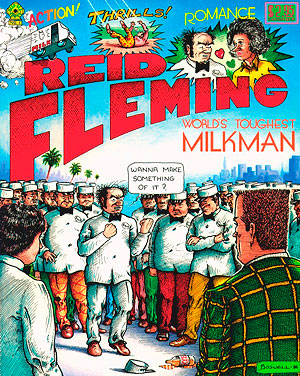 "I'm not bald! I get my hair cut this way!"
— Reid Fleming
Advertisement:

An underground, self-published comic from 1978, the story follows the adventures of the titular anti-hero, Reid Fleming. He is surly, quick to violence, and chugs coffee and cigarettes like there's no tomorrow.

A truly Jerkass Anti-Hero, Reid characterization fits in with the moral ambiguities present in many of the underground comics of the '60s and '70s.

Shannon Wheeler, creator of Too Much Coffee Man, cited the comic as an influence on his own work.