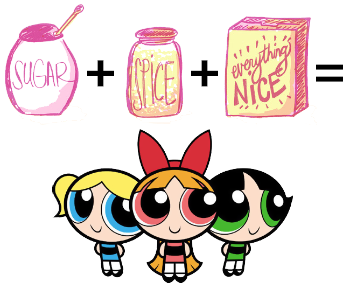 Using sugar substitutes and mayonnaise instead creates the Milquetoast Girls. P.S: Chemical X not included in the recipe, that was an accident.
"Simply touching SCP-999’s surface causes an immediate euphoria, which intensifies the longer one is exposed to SCP-999, and lasts long after separation from the creature. Subject’s favorite activity is tickle-wrestling, often by completely enveloping a person from the neck down and tickling them until asked to stop (though it does not always comply with this request).
While the creature will interact with anyone, it seems to have a special interest in those who are unhappy or hurt in any way. Persons suffering from crippling depression, after interacting with SCP-999, have returned completely cured with a very positive outlook on life. The possibility of marketing SCP-999’s slime as an antidepressant has been discussed."
— SCP-999

Positive emotions and virtues like love and gratitude usually are not physical concepts. You can't see them; you can't feel them.

But they are now! These objects are materialized out of good feelings. Whether they power you up, you need to collect a bunch of them for some purpose, or they make a weapon for you to use, they are physical manifestations of goodness. On occasion, you may find a living being made of it. Conceptually similar to things made of Pure Energy.

Compare Care-Bear Stare, which is instead an attack, not object, of positive emotion. A weapon made of this may overlap with Holy Hand Grenade and/or Silver Has Mystic Powers. If the object represents a certain virtue, it's an Embodiment of Virtue. Contrast, obviously, Made of Evil. See also God of Good.