Film / A Trip Down Market Street 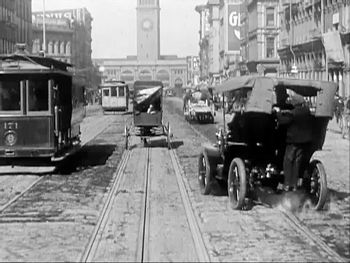 A Trip Down Market Street (1906) is an "actuality film" directed and produced by the four Miles brothers—Harry, Herbert, Joseph, and Earle. The film has no story, and is exactly what the title describes, namely, a trip down Market Street in San Francisco, starting at 8th Street and going down to the Embarcadero, stopping in front of the Ferry Building. Harry Miles set up his camera on the front of a cable car and hand-cranked it for approximately 13 minutes, filming Market Street as the cable car progressed downhill to the end of its route.

"Actuality films" were sort of proto-documentaries in which early filmmakers simply rolled their cameras and filmed things they deemed to be interesting. They were more common than scripted films in the early days of filmmaking. This film, besides being a unique portrait of transportation, dress, and urban architecture at the turn of the 20th century, is notable for having been filmed right before the earthquake and fire that destroyed almost all of San Francisco. The exact date is not known, but historical research and analysis of the film indicates that photography took place about three weeks before the April 18, 1906 earthquake and fire that destroyed everything in the film except for the Ferry Building.