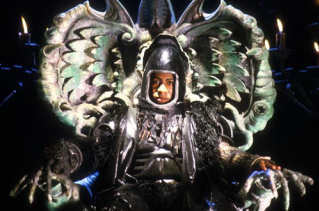 Sometimes you astonish even me!!
The episode opens on an house somewhere in space. An ordinary man wakes up to find himself confronted by a simulant in a skull mask, who announces that he has been deemed unworthy of having existed, and he will be replaced. The man is erased, and a new fellow appears—a man born to the same parents, who might have existed and is now being given the chance.

Fast forward three million years. The simulant, in his time-space travels, finds Starbug and announces that he is going to try the crew on their worthiness to live. Kryten explains that this must be The Inquisitor, a rogue simulant who has made it his mission to travel throughout the universe and "delete" people, replacing them with individuals created from a different sperm or egg, if he deems them to have failed living up to their potential and thereby wasted the precious gift of life.

Which is bad news for everyone.

The first called before the Inquisitor is Rimmer, who angrily demands how the Inquisitor can be a fair judge. The Inqusitor responds that all who are tried before him are judged... and here he lifts the mask to reveal Rimmer's face... by themselves. "Oh, smeg!" remarks Rimmer, something his other self agrees with. Rimmer's defence falls flat, prompting the Inquistor to remark on how he's a slimy, despicable, rat-hearted green discharge of a guy. Rimmer concedes he can't have been anything else, with his lunatic dad and his mad mom. Hell, from his starting standpoint, being a nothing is a step up.

The Cat is next, and his only defence is his ass. Hey, he's a shallow guy, but he's got a great ass! Then comes Kryten, who declines to accept commendation for all his selfless deeds, since that's just him following his programming, angering the Inquisitor when he asks why it judges people. And Lister... just tells the Inquisitor to smeg off.

The judging complete, the Inquisitor tells the four that two of them have been found unworthy, and will be erased. At the press of a switch, the Cat and Rimmer disappear. Lister is outraged, until Kryten points out the problem: The Cat and Rimmer aren't the ones on the chopping block.

Lister: The Cat has led a more worthwhile life than either of us?
Inquisitor: He is a shallow and selfish creature - as is the hologram. By their own low standards, they have acquitted themselves. Whereas you and the mechanoid could've been so much more.

Before the Inqusitor can finish erasing Lister and Kryten, they're saved by... Kryten? A future version of Kryten jumps in and slices off the Inquisitor's hand, giving them his gauntlet. But while they're talking, the Inquisitor recovers. Future Kryten's final words before his head is crushed are "enig". Lister and Kryten scarper back to Starbug, where they try to get the Inquisitor's bindings off. Lister blames himself for getting Kryten into the whole mess, but Kryten insists he believes in Silicon Heaven, but he doesn't anymore, thanks to Lister teaching him to lie. They do eventually manage to crack the chains, and head back into Red Dwarf. Only there's a problem: The ship and Holly don't recognise them. Because they don't exist there anymore. note Technically, they never have will existed there anymore, but this is no time to be conjugating temporal verbs in the past-impossible never tense

They're met by Rimmer and the Cat. Rimmer, as the smeghead he is, insists on killing these weirdo intruders immediately. Lister manages to prove he knows who he is by producing a very, very long list of all the reasons Rimmer is a smeghead. Then Lister and Kryten come in. ... err, that is, the Lister and Kryten who've been created thanks to the Inquisitor, their "sperms in-law" as Lister puts it. Despite the physical differences, Lister-B is pretty much the same as Lister-A, and he defends his counterpart from Rimmer's attempts to kill them. Then the Inquisitor shows up again. In the ensuing melee, the other Kryten and Lister are killed. But Lister manages to find a way to access Red Dwarf's systems now.

As the two try to think of a way to deal with the Inquisitor, the Cat and Rimmer catch up, throwing their lot in with them. Not that it does them much good when the Inquisitor returns, leaving just Kryten and Lister. Kryten has managed to figure out the way the gauntlet works, and freezes the Inquisitor in time while he's beating up Lister. As Kryten prepares to go back in time and sacrifice himself, his replacing the gauntlets gives Lister an idea.

With the Inquisitor gone, his victims are restored. Kryten tells Lister this is probably an appropriate juncture for them to high-five. Lister, who's still got his alternate's arm, thinks he can do Kryten one better...