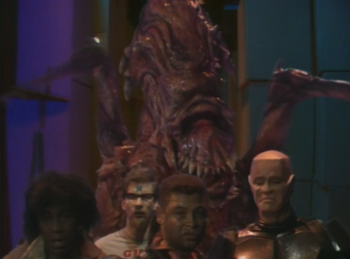 The Polymorph, ready for seconds.

"This week's Red Dwarf contains scenes which are unsuitable for younger viewers and people of a nervous disposition. You have been warned!"

It starts out as an average day aboard the Dwarf. Lister is preparing a meal that is being served with medical utensils, which disgusts the Cat. Rimmer is watching some old home movies, and Kryten feels incredible guilt over calling Rimmer's mother a trout. Their relative peace is shattered by Holly declaring that a non-human lifeform has been detected on board.

Said lifeform turns out to be a shape-shifter which transforms into a kebab, and attacks Lister before squirming away. It then copies his boxers, and begins shrinking when Lister unwittingly puts them on. Rimmer comes in to see Kryten trying pull the "boxers" off. Because of his vantage angle, and Kryten having his groinal vacuum attachment plugged in, Rimmer comes to the immediate conclusion that Lister has finally surrendered all standards. The shape-shifter turns into a snake, and then a giant armor-plated monster, sucking all fear out of a terrified Lister.

It turns out the creature, a Polymorph, is a shape-changing human-created genetic mutant that went wrong, the 'Ultimate Warrior' that as shown provokes negative emotions like fear, guilt, anger, paranoia and drains them out of its prey. There is just one problem though. "It's INSANE!" The crew discusses their options and decide to run off rather than take it on. They seal Lister (who, due to having no fear, is all too eager to take on the Polymorph and "twat it") in the medical unit and go off to prepare Starbug, deciding not to tangle with anything that has "more teeth than the Osmond family".

As they travel through the cargo decks, a false alarm causes the Cat and Kryten to let off a couple of heat-seeking bazookoid bolts down the corridor. The bolts immediately turn back towards the group: they are now homing in on the Cat as the only heat-source present, and he makes a run for it. He manages to trap the bolts behind a door, and on his way back, he is joined by a woman who flatters the Cat on his good looks, but she then unsurprisingly turns out to be the polymorph and drains the Cat's vanity. Kryten rushes onto the scene, followed by Rimmer. Rimmer tells Kryten that this is all his fault, then changes into the polymorph and drains out Kryten's guilt, transforming him into a colossally snarky Jerkass. On their arrival back at the medical unit, Rimmer finds his mother lying down with Lister. Rimmer tries to suppress his anger, but eventually fails when he learns that Lister's sex life with her involved Alphabetti Spaghetti. Rimmer's mother changes into the polymorph and drains Rimmer's anger.

In the sleeping quarters, the emotionally crippled crew try to work out their next move.

Despite all this, the four head down to the cargo decks to confront the creature. Although things don't start well, the two heat-seeking bazookoid bolts are released and finally find the Polymorph, destroying it. Splattered with the debris, the four are restored to normal, with the Cat desperate to clean himself up, Kryten ready to commit suicide to make up for his bad behaviour, and Rimmer confused.

The space-pod that the creature emerged from is shown, and belatedly reveals a sign that states "Contents 2". Back on the cargo bay, the group walk in line, first Cat, then Kryten, Rimmer, Lister - and finally a second Lister, who looks at the screen, turning into another Polymorph.