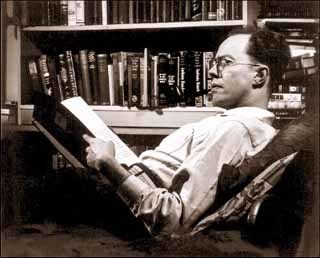 Anthony Boucher (1911-1968) was the pen name of William Anthony Parker White, an American writer, editor, and reviewer of mysteries and science fiction. His novel Nine Times Nine is considered a masterpiece of the Locked Room genre. His short fiction was more varied, covering mystery, science fiction, and fantasy. One of his mystery novels, Rocket to the Morgue, was actually set in science fiction fandom, and included references to many notable people in the science fiction community, including Robert A. Heinlein and L. Ron Hubbard. His science fiction short story, "The Quest for Saint Aquin", was chosen as one of the best SF stories of all time by the Science Fiction Writers of America in 1970.

He also wrote for scripts for radio, including The Adventures of Ellery Queen and a Sherlock Holmes show. He eventually got his own radio show, The Casebook of Gregory Hood.

As an editor, he published numerous anthologies of mystery and SF, and was co-founder of the very successful magazine Fantasy and Science Fiction (F&SF). He was one of the first to translate Jorge Luis Borges (the master of Magic Realism) into English.

He wrote a long-running mystery fiction review column for the San Francisco Chronicle, and another for the New York Times. Several collections of his reviews have been published.

He was a founding member of the Mystery Writers of America. Bouchercon, aka the Anthony Boucher Memorial World Mystery Convention, was named in his honor.