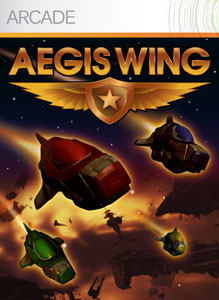 Aegis Wing is a side-scrolling Shoot 'Em Up released in May 16, 2007 for the Xbox LIVE Arcade.
Advertisement:

The game takes place in 2105 where the Earth's environment is devastated and humankind travels through space in search of a new home world. Upon finding and settling upon the planet Europa, the human colonists are attacked by the space military of an alien colony-people known as the Araxians. After studying downed Araxian fighter technology, the humans develop a powerful space ship capable of using great firepower to be used against the Araxia in the war for Europa.

The gameplay is pretty much classical. You control a space ship and fly in a 2D world, collecting power-ups along the way, and try to destroy as many enemies as possible. At the end of each level there will be a boss, and sometimes along the way you meet mini-bosses too.

The game is very hard if you play it alone. Luckily, the game has a co-op mode, with up to 4 players max. In co-op mode, two players can attach their ships together, resulting in one ship having the ability to fire bullets in different directions instead of just straight forward. It doesn't sound like much, but it can be used to take out enemies without directly being in front of them. However, the bullets' power is halved.