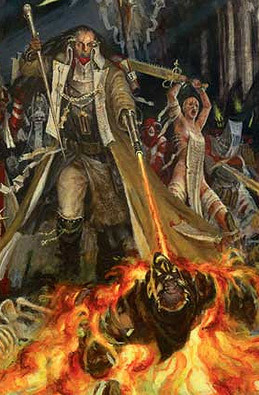 A Super-Trope to Matchstick Weapon. See also Incendiary Exponent, Man on Fire, Burn Baby Burn, Fire-Breathing Weapon, Homemade Flamethrower, Burn the Witch!, Fanatical Fire, Gasoline Dousing, and Hellfire (for when mundane fire doesn't do the job). Compare Stuff Blowing Up and Playing with Fire — for when someone has fire as a superpower, and Murder by Cremation — when an ordinary person is lit on fire. When this just makes things worse, see Infernal Retaliation. May also overlap with A Molten Date with Death if lava is involved. The less-used opposite is either Kill It with Water or Kill It with Ice, or even Heal It with Fire. Contrast Immune to Fire.

If you were looking for the video game by the same name, you'll find it here.