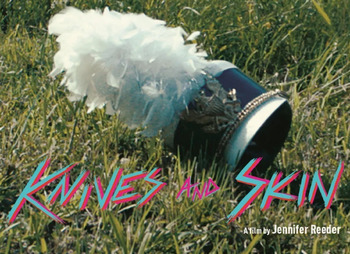 Have You Seen Carolyn Harper?
Knives and Skin is a 2019 teen drama directed by Jennifer Reeder.

In a rural town, choir teacher and single parent Lisa Harper finds out her teenage daughter Carolyn went out with a boy and never came home. Fearing the worst, Lisa loses her grip on reality.

Carolyn's three friends Joanna, Laurel and Charlotte struggle to deal with their friends' disappearance as well as their own personal dramas. Joanna is forced to find money through illegitimate means due to her mother's mental instability. Laurel must come to terms both with her homosexuality and Charlotte is a frequent target for bullies, one of whom is Laurel's brother who secretly pines for her.On top of all this, Joanna's father has lost his job as a party clown and is sleeping with Laurel's mother.

Not to be confused with Knives Out, which also deals with a family member dying.

Can you hear them?
They talk about us
Telling lies, well that's no surprise
Can you see them?
See right through them
They have no shield
No secrets to reveal
It doesn't matter what they say
In the jealous games people play
Our lips are sealed