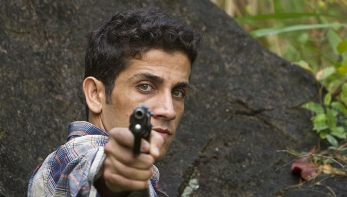 Gary Montebello is about to shoot you.
Advertisement:

The Straits is a groundbreaking Australian crime drama in terms of its rare setting and (specific) concept - the deadly smuggling trade between northern Australia and Papua New Guinea. It explores how the business of the modern, Western crime syndicates effects those around them - from the city-slickers in Cairns, to the traditional Torres Strait Islands, to the tribes people in the developing nation of PNG.

The series covers the Montebello crime family's struggle for power - both against other crime entrepreneurs, and amongst themselves. It begins with the head of the family, Harry Montebello, allowing his three sons to compete to succeed him as head of his business. It is character driven and extremely well written, and features an exceedingly rare setting worth a look for its beauty as well as its novelty.