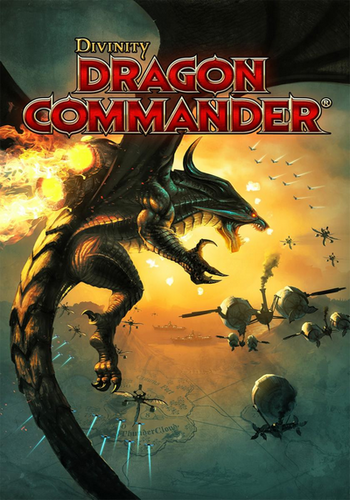 Divinity: Dragon Commander is a video game set in the same universe as Divine Divinity by Larian Studios. As a Half-Human Hybrid, royal bastard, and youngest prince of an empire in chaos, the player character (the eponymous dragon commander) is tasked with capturing territory and using armies to battle those of his evil half-siblings.
Advertisement:

The game has two primary phases with two genres. The strategy map is where the player determines army movements, building placement, research, and the use of strategic cards in typical Turn-Based Strategy fashion, reminiscent of a Risk map. When opposing armies occupy the same territory, the player can let the computer auto-resolve the battle, or opt to take command personally in a Real-Time Strategy engine, with the most notable feature being your ability to turn into a dragon and personally partake in the battles.

The single-player campaign adds RPG Elements by means of the dragon commander's actions aboard his airship, the Raven. As the autocratic leader of an empire and military force, there are decisions to be made in both domestic and military affairs. Decisions have an impact on the approval ratings of the empire's five primary species. Many decisions also have an impact on the strategic map itself — for example, enacting conscription is unpopular with most species, but permanently reduces unit construction costs.