The Power of Glass 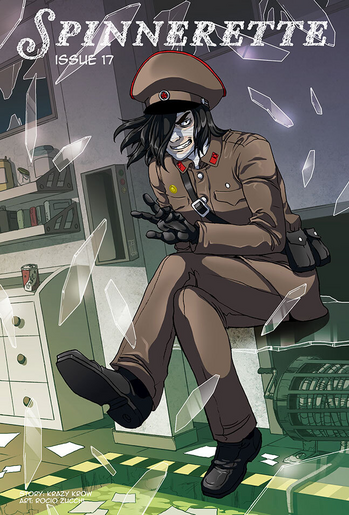 Paper cuts have got nothing on this.
"This is Gara, the unbreakable warrior. Manipulator of glass, she fractures the resolve of her enemies. The shattered remains of her enemies are all that Gara leaves behind. Tread lightly.
— Lotus, Warframe
Advertisement:

As we know, broken glass is sharp, and nobody likes being cut by it or having to deal with a dropped object or shattered window.

This trope is about a character having the power to create and manipulate glass for various purposes. Some folks even go so far as to make an artform out of it.

Glass manipulation, or "hyalokinesis," is when someone creates, shapes and manipulates glass, an amorphous (non-crystalline) solid material, through some form of magic. The simplest application is creating sharp shards of broken glass to slice up or impale opponents. If an existing form of glass isn't around, no worries: just use the proper molecules in the surrounding environment to make some. Even better, just turn yourself into some and go to town, provided that you can put yourself back together. Failing those tried-and-true applications, there's good old Shaping Your Attacks like the other kinds of elemental manipulation. These powers are often used to create mirrors or lenses. The glass used tends to subvert Soft Glass, or otherwise the enemy wouldn't even get a scratch on them.

Outside of combat, because of the widespread prevalence of glass, some are just content to make all sorts of artwork, applications, or items for aesthetics or everyday use. That engineer's life becomes so much easier if they can walk up, snap their fingers, and replace that giant hole in a glass building in under a minute.

Also, precisely because glass is everywhere, one can get really creative with their use of glass, such as making mirrors to making reflections (illusions), refracting ambient light, and more. To say nothing of the myriad weapons someone could make. Beware of brittleness though.

is often the most commonly represented form of glass used for his trope. That said, it doesn't have to be the only kind. Obsidian, fulgurite, volcanic glass, and more also qualify.

Related to Sand Blaster since sand plus heat equals glass for the most part. A Magma Man can be related if volcanic glass is thrown into the mix. For that reason, hyalokinesis doesn't have to be the main power of an example—just a useful facet. Glass is considered the result of a combination of elements, like Fire combined with Earth, but can sometimes be used as an elemental power in and of itself.

Sub-Trope to Single Substance Manipulation. Compare Magic Mirror, Sand Blaster, An Ice Person and Gemstone Assault. Usually attacks via Flechette Storm. If the character can turn things into glass, see Taken for Granite. Not to be confused with Power Crystal.

Note: If someone is just extending their magical capabilities of levitation, transfiguration, etc. to available glass, it is not this trope. They must have explicit and specific control, be it wholesale hyalomancy or a magic spell, over glass.