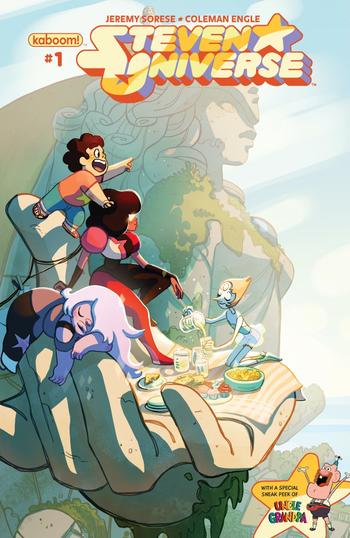 The first issue of the first run.
Advertisement:

Steven Universe is a comic book series by KaBOOM! Comics. It is based on the cartoon of the same name.

The first series began in August of 2014 and ran for eight issues, with a short teaser story released in the Adventure Time 2013 Spooktacular. Since then, there have been a number of comics, special issues, and graphic novels for the show.

Comics and graphic novels include:

This comic books in general provides examples of:

Trying on clothes for prom. (Dub by Shelly Kitten on YouTube.)

Trying on clothes for prom. (Dub by Shelly Kitten on YouTube.)