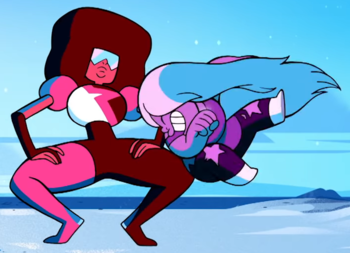 As this show was made by someone who worked on Adventure Time and it airs on Cartoon Network, a station known for children's shows with their fair share of family-unfriendly material, it'd be more of a surprise if this show didn't have a radar page, but unlike that and other shows from the station's "renaissance" age, this series doesn't revel in radar-dodging antics.

However, having a TV-PG rating means that typical examples of radar-dodging for other shows get a pass. Not only that, but the showrunners work directly with the standards and practices folks to know exactly where and how to push the envelope, meaning that everything is fairly subtle and innocuous, with little in the way of these shows' typical sexual innuendo: contrary to popular interpretation, Rebecca Sugar and writer Matt Burnett

◊ are insistent that fusing is a metaphor for relationships (not strictly romantic ones), and Sugar's personal philosophy that a relationship is its own person, not simply sexual intercourse. Despite these efforts, the show has still received its fair share of censorship in various countries, with the UK, Russia, and the Middle East dishing it out the hardest. With the exception of the UK, these countries aren't as tolerant of LGBTQ+ people as the United States and have rules against depicting them in children's entertainment.

ALL spoilers are unmarked! Proceed with caution.

Advertisement:
Season 3
Too Short to Ride

Season 5
Back To The Kindergarden