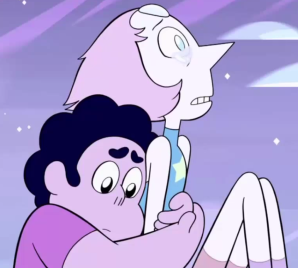 "...I think you're pretty great." note  This will eventually be so much Harsher in Hindsight.
"The Crystal Gems, they're made out to be a magical force while sidelining as Steven's three stepmothers. As you would in the perspective of a child, one is under the impression your parents are in total control of a situation and have all the answers. But as Steven matures, the realization chips away that they're just as flawed and clueless as to what's going on as anyone else. They're a broken family missing both a leader and Steven's real mom, confused to what Steven's existence really means."
—Pan Pizza, explaining why the show has such a long Tear Jerker page.
Advertisement:

The bright colors and quirky characters set quite the cheery tone, but if you're at all familiar with Rebecca Sugar and her previous work, don't be surprised if you find yourself occasionally reaching for the tissues.