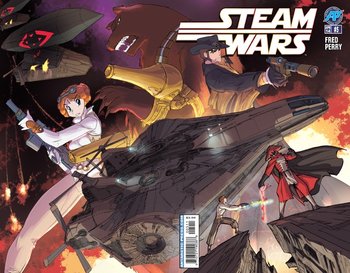 Steam Wars is a five issue comic book by Fred Perry (of Gold Digger fame) and published by Antarctic Press. It is meant as a steampunk semi-parody / re-telling of Star Wars made during the time of the company's Steampunk phase.

At first glance the story is pretty much how the Star Wars movie goes down: An evil empire, in this case, the Hegemonic Crux, oppressing a world lead by an evil being known as Lord Baron (Darth Vader’s counterpart). A resistance trying to stop him lead by Duchess Imoen (Princess Leia’s counterpart), with a few key members such as bounty hunter Hansel Lowe and his furry bear companion, Smokey (Han Solo and Chewbacca’s counterparts). The last of a order of knights known as Quantum Dragoons (the jedi order’s counterparts) named Beauregard "Bo" Baron (Luke Skywalker’s counterpart), who use powers similar to Lord Baron and plenty of secrets that tie in with the main characters. There’s also Klesse (C-3P0’s counterpart), General Teft (Boba Fett’s counterpart), Master Yodel (Yoda’s counterpart, although she doesn’t appear in the first miniseries), the hegemonic shock troopers (the imperial stormtroopers’s counterparts) and many, many more characters to add to the list.

However the similarities ends in appearances and roles, the story is very much it's own original creation with many of it own twists and of course the setting using many steampunk themes and imagery which makes for a fun read to fans of Star Wars or the sci-fi and steampunk genre in general.

A sequel book, Steam Wars: First Empire followed along with another book, Steam Wars: Bounty Hunters as well as a 2015 Holiday special. The comic also had the honor of being reviewed on Atop the Fourth Wall (albeit under the request of a Patreon sponsor) that Fred himself, who is a fan of the show, even supplied the title card for the episode. In 2017, the Holiday Special was likewise reviewed on the show (again, Patreon requested).

Here's a for page preview from First Empire

Steam Wars has the following examples