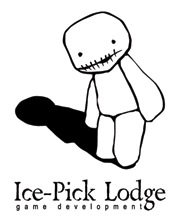 Ice-Pick Lodge is a Russian game developer studio founded in 2002 and consisting of only eight people. They are known to make groundbreaking, strange if somehow non-functional games, rich in Mind Screws and somehow incomprehensible and symbolic writing. Notable for being the only Russian game developer with a liberal arts major (Nikolai Dybovsky) for a boss and creative director—which kinda explains the aforementioned mind screws.