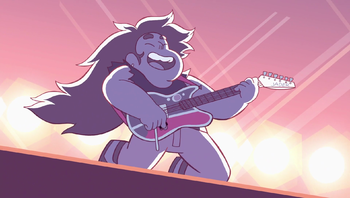 At the moment that I hit the stage, I hear the universe calling my name...
Advertisement:

Before Steven Universe, Rebecca Sugar was already well-known for her amazing compositions on Adventure Time, so it goes without saying her first animated series contains some choice tracks. She even made sure that most of the voice cast on the show were either professional singers or have decent singing voices, because music was going to be a huge part of the experience. In fact, some fans got introduced to the music specifically as a reason to watch the show. The background music isn't something to shake a stick at either, as a lot of it, with the work of composers Aivi Tran and Steven "Surasshu" Velema being memorable and infectious. The fact that it's one of the few Western shows to get an officially released soundtrack of its lyrical songs really says something.