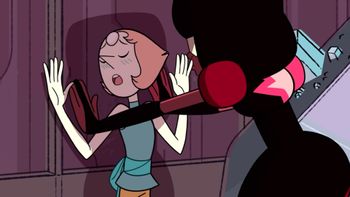 How to Fuse With Someone, Step 1: Pin them to the wall while they ferociously blush.
Advertisement:

Steven Universe is "one of the most unabashedly queer shows on TV", according to The Guardian, and the series has received much critical attention and praise for its hitherto unprecedented degree of LGBT representation. The creator, Rebecca Sugar, explained this as influenced by her own experience as a bisexual woman, and by her desire to allow queer kids to see love stories on TV in which they can recognize themselves.

It's therefore no surprise that there is quite a bit of Ho Yay going on. Because Gems, the "anthropomorphic space rocks" that make up much of the characters of Steven Universe, are not human and have No Biological Sex, the show can perhaps get away with a bit more than a kids' show with human characters could, explaining to moral guardians that the scenes of tenderness between gems are not romantic, no sir, because the concept of sexuality does not apply to Gems. Nonetheless, the Gems are a One-Gender Race that presents as female (using she/her pronouns, etc.), and therefore viewers experience this trope to its fullest extent. So much that the possible pairing clues had to be split into folders.