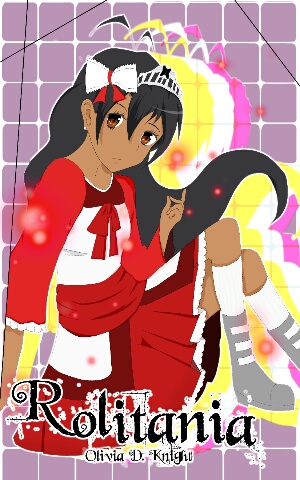 She only looks harmless...
"Our sins were staggering. No wonder they had called us war criminals. After all, our hands already were stained with oceans of blood."
— Kurokochōhime, Chapter Eight
Advertisement:

Rolitania is a Young Adult Slice of Life romance about The Power of Love written by Olivia D. Knight. Published in late 2014, it stars an Unlucky Everydude who can’t seem to get a break in life. Set in a Fictional Country called "Rolitania" that's Americasia placed on an unusually large man-made island.

Samuel Stevens is an “ordinary” student who happens to live in a very strange country. All of the residents are hardcore Otaku of varying interests, who take themselves very seriously. Actually, he’s somewhat normal, considering the fact that everyone around him is just as obsessed with…whatever they’re obsessed with. In this story, ‘otaku’ is used in the original sense of the word, and not just describing fans of anime.

However, Sam himself is a fan of anime and manga, is somewhat Genre Savvy, and the Queen of their country happens to be stalking him.

He may have wished that life were more like anime, but he didn’t mean it in this way! Why she’s doing this is a mystery, but it’s clear to see that he’s not getting away from her any time soon. He isn’t concerned, though, despite everything. Even if she beams memories into his mind.

Despite having an Animesque cover and reading like a Light Novel, it lacks pictures. What it doesn't lack, however, are Shout Outs to several popular series.

"I will keep you safe, My Dearest."