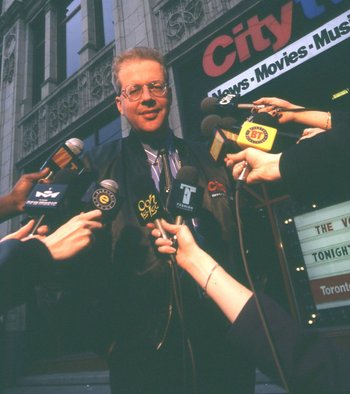 From the breakthrough station at Queen and John, this is Citytv, EVERYWHERE!
Advertisement:

Mark Edward Dailey (August 1, 1953 - December 6, 2010) was a Canadian news anchor and voiceover artist, most famous for his work at the original Citytv in Toronto.

Born and raised across the border in Youngstown, OH, Mark was an Ohio State Trooper; he actually was basically Johnny Depp in 21 Jump Street, going undercover at a high school to track down drugs and criminals. He then became a reporter, naturally focusing on crime, for several TV and radio stations. He moved across the border to Windsor's CKLW before heading for Toronto in 1974. He spent time at several radio stations before joining Citytv in 1979. Back then, the station had a tiny budget and its' signature program, the groundbreaking newscast CityPulse was rather small. Dailey brought not only a connection to the law enforcement community (indeed, he'd been shepherded to the station by assignment editor Glen Cole, an ex-RCMP officer), but his trademark baritone voice. (Combined with his fedora and trenchcoat, he definitely looked like either a cop, or a hardboiled detective.) After filling in for some needed voiceovers when other VOs employed by the station were absent, he soon became "The Voice" of the entire station, doing everything from promos and intros for the nightly Great Movies, but also their famous ident bumpers, showcasing the people and locations of Toronto, ending each one with the station's slogan— "This is Citytv, everywhere!" His voiceover talents were also utilized by sister station MuchMusic and eventually other channels and stations owned by CHUM Limited. In almost all cases, as befitting the irreverent, mold-breaking tone Moses Znaimer (head of both stations) encouraged, he often served as a Deadpan Snarker when on VO detail. He eventually became anchor of the station's CityPulse Tonight late bulletin by the early 90s

, and by the late 90s moved into voice acting/dubbing as well (mostly for Nelvana).

Even despite the upheavals of the mid-to-late 2000s (as CHUM was sold to CTV and City itself was sold to Rogers), he remained at the station doing what he did. But sadly, despite successfully battling prostate cancer, kidney cancer emerged and spread to his lungs. Dailey died on December 6, 2010, and combined with cutbacks resulting in layoffs of many of his fellow reporters and anchors, essentially symbolized the End of an Era at City.

He was also the subject of a persistent urban legend— it was supposedly him doing the deep voice in the Rush song "Subdivisions". After years of back and forth confirmation on the rumor, it's since been confirmed to be him (Retrontario's Ed Conroy has theorized Rush simply sampled Dailey's voice from a CityPulse report where he said the word). A collection of his work can be seen here

Voice acting/dubbing roles of his include: