Fanfic / A New ROAD of Misfortune 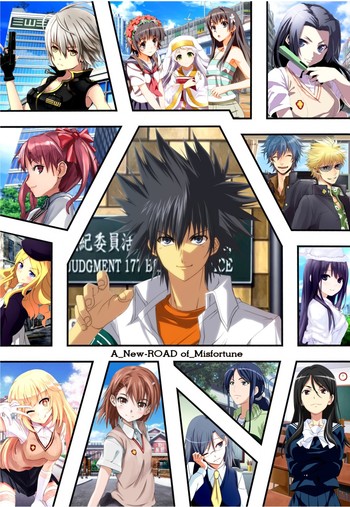 A New ROAD of Misfortune

is a A Certain Magical Index fanfiction created by Itherael

This Original Flavor story begins with an unfortunate For Want of a Nail event that causes Touma Kamijou's entire future to take a new direction, or new road as the author would say. Many canon events may have changed slightly in this timeline. Its Alternate History plot is based on the fact that Touma Kamijou arrived to Academy City one week later than planned due to an accident he suffered just before moving to the City of Science.

The author had also created the story’s own profile

, in which he makes certain recommendations and also displays many links for each published chapter. Each chapter(separated in sections), holds links for songs that the author himself recommends to improve the reading experience. Surprisingly, Itherael had created manga pictures for each chapter, as if to attempt to make his story resemble a light novel.

was also made by him, which changes depending in how the story progresses. So far, the latest events of the story had revealed a new cover.

The story starts with a pre-memory loss Touma, even before the canon events of the A Certain Scientific Railgun spin-off.

However, due to the length of each chapter, updates take rather long to be published.

Tropes found in A New ROAD of Misfortune