Literature / Watchers of the Throne 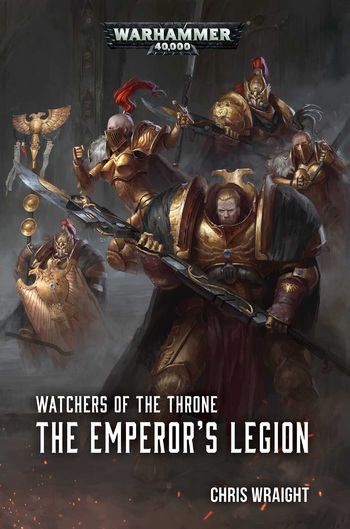 Badass and fabulous.
We were His companions, once. We were the ones in whom He confided. We were His counsellors, we were His artisans. We were the first glimpse at what the species could become, if shepherded aright and unshackled from its vicious weaknesses.
— Valerian
Advertisement:

Watchers of the Throne is a series of Warhammer 40K novels by Chris Wright. They take place at roughly the same time as the game's "Gathering Storm" campaign, which advanced the plot of the setting. Currently, the series is comprised of:

As the Thirteenth Black Crusade slowly pushes its way into the distant star system of Cadia, the High Lords of the Imperium play their politics as usual. Some among them, however, are coming to realize that this war will be worse than anything to have come before. Imperial Chancellor Lev Tieron tries to get the Senatorum Imperialis to assemble so that they might send the mighty Custodian Guard into battle; Sister of Silence Tanau Aleya returns to her convent to find it destroyed; and Shield-Captain Valerian of the Custodians finds himself on the Palace walls just as the whole planet seems to go mad.