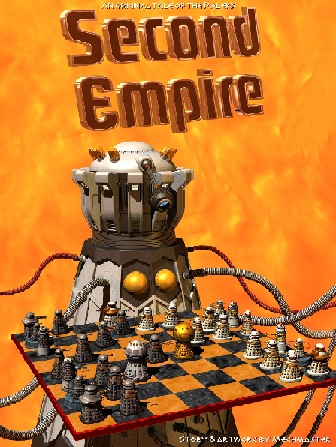 Second Empire is a CG webcomic made by Mechmaster with the Daleks from Doctor Who as Protagonists.

The story follows that of General Xenol of the First Conquest Army. Having ignored the orders of the Golden Emperor to establish an outpost at a swamp-world in favor of invading the more threatening planet of Slepkt IV, he is brought to Skaro for insubordination. At first the Golden Emperor congratulates Xenol for identifying the greater threat, only to chastise him for having failed to secure victory against the Slepktians.

Xenol then complains that the reason he hasn't been able to conquer Slepkt is because, while the genetic programming of his Dalek troopers produces excellent soldiers, they lack initiative and have been out-thought by the Slepktians. The Golden Emperor is having none of it and it soon becomes obvious that he cares more about having obedient drones than competent soldiers.

This gets Xenol to think with his top scientist Yttral - The Dalek Empire as it stands owes much of its power to other races, who create and maintain pretty much all Imperial technology. The Daleks slowly but steadily are decaying as their conquered peoples lose skilled laborers and as the genetic programming that they depend upon is steadily weakening the race by making them overdependent on their casings. Computers do much of their thinking and their leaders have slipped into complacency, content to obey their machines. Yttral himself is considered insane for actually performing research. Original Kaled devices are almost mythical Lost Technology.

But the straw that broke the camel's back? New Daleks created on Skaro are no longer being issued names. The computers now only issue alphanumeric strings of code.

Xenol, supremely pissed off at this corruption of the Dalek dream, decides it's time to act, and the idea for a Second Dalek Empire is born...

Now with a character page

The prequel comic Trapped In Amber

is available on the same site and tells the story of the battle for Weltro Major and Defence Post 27 Amber, first mentioned by Grexzol here