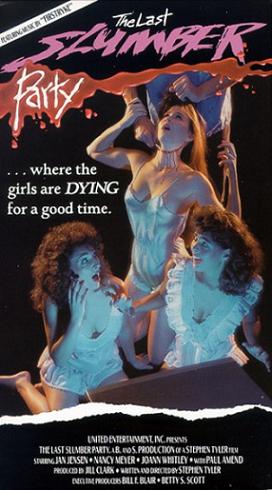 Dead Man's Party.
"If Ed Wood was still alive and making slasher flicks in the late 80s, he might have made something like The Last Slumber Party (but maybe I’m being unfair to old Ed) - a film so mind-bendingly awful that it transcends normal bad-movieness and takes off into uncharted realms of almost cosmic shittiness."
— Hysteria Lives

The Last Slumber Party is a Slasher Movie released in 1988.

After learning he is set to be lobotomized by the staff of the Oak Ridge Memorial Hospital, an extremely volatile mental patient named Mr. Randles (a name only used near the end of the film) somehow sneaks out of his room, and into a supply closet, where he disguises himself as a surgeon, and escapes, leaving a pile of sheets under his blanket to cover his tracks. Wanting revenge on his keeper, one Doctor Sickler, Randles (after murdering a nurse and an orderly at a bus stop near the asylum) begins making his way to the good doctor's house, bloody scalpel in hand.

As the escaped maniac stalks around town, three Northridge High gal pals by the name of Chris, Tracy and Linda (who happens to be Doctor Sickler's daughter) decide to celebrate the start of summer vacation by holding a slumber party at Linda's house, since only her sleepy mother will be home, allowing them to easily sneak in booze, drugs and boys; and said group of boys consists of Chris and Tracy's troublemaker boyfriends, Tommy and Billy, and their less mischievous buddy, Scott, who everyone intends to set up with Linda.

Of course, Mr. Randles happens to crash this slumber party when it gets into full swing, sneaking into the house via a ladder left leaning against a window by the boys, who used it to gain access to the house. Deciding to take his rage out on Doctor Sickler's family and everyone else under his roof, Mr. Randles sets about making sure this is a slumber party no one will forget... because it'll be The Last Slumber Party!

An obvious cash-in on the success(?) of The Slumber Party Massacre series, one of those responsible for the creation of The Last Slumber Party, executive producer Bill F. Blair, has gone on record stating that he considers it "the worst film ever made". And this is a guy responsible for such schlock as Blood Cult, Forever Evil and Terror at Tenkiller, the latter being available on a DVD double feature with this film released in 2004.

Taken to task by Mike, Kevin, and Bill on RiffTrax.