Literature / The Dogs of War 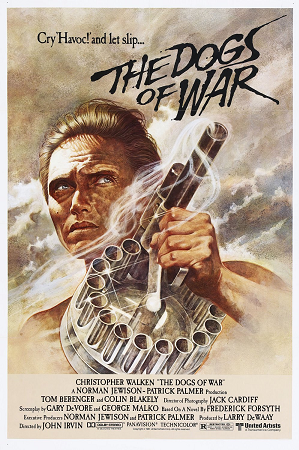 "Knocking off a bank or an armoured truck is merely crude. Knocking off an entire republic has, I feel, a certain style."
—Sir James Manson
Advertisement:

The Dogs of War is a 1974 novel by Frederick Forsyth. It follows Sir James Manson, who discovers a large amount of valuable platinum in Zangaro, a People's Republic of Tyranny, and endeavors to obtain it via a discreet coup d'état. For this end, he employs Cat Shannon, a mercenary, who is given a hundred days to gather his team and make the strike. The rest of the book follows Shannon as he gathers his old friends and prepares for it.

This book is a famous example of Shown Their Work; Forsyth spent time covering the Nigerian Civil War, and drew heavily from his experiences there. Several people have even tried to carry out coups in real life based on the methods presented within. Forsyth actually pretended to be overthrowing the government of Equatorial Guinea based on the very methods he later put into the book, although it is not quite clear whether he would have actually succeeded.

Made into a 1980 film directed by John Irvin and starring Christopher Walken.

The film contains these additional tropes:

Alternative Title(s): The Dogs Of War