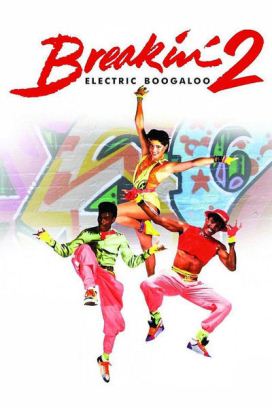 Breakin' 2: Electric Boogaloo is a 1984 movie about breakdancing, and a sequel to the same year's (you heard us, the same year) Breakin'.

Kelly, Ozone, and Turbo are members of a group of street kids that frequent the community center Miracles, where they're working over the summer. But a greedy land developer is planning to bulldoze Miracles and build a shopping center! The kids must band together to save their neighborhood. At the same time, Kelly and Ozone must deal with their conflicted feelings toward each other, as Kelly considers taking an acting job in Paris, and Turbo embarks on a quest to find a girl. That's pretty much it; most of the movie is just corny, entertaining dancing.

The movie was a pretty big flop, and regarded as an entirely unnecessary sequel; today, it's best known for spawning the "Electric Boogaloo" joke, used to refer to any pointless or strangely-named sequel.