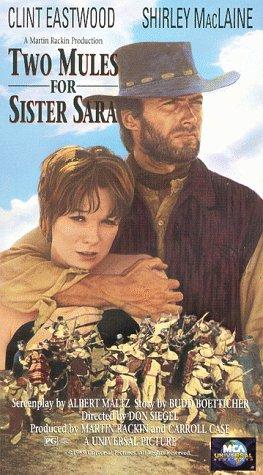 Two Mules for Sister Sara is an American-Mexican western film starring Shirley MacLaine and Clint Eastwood set during the French intervention in Mexico. The film was released in 1970 and directed by Don Siegel.

A drifter named Hogan spots and saves a naked woman from being gang-raped by several bandits whom he shoots and kills. He later learns that the woman, Sara, is a nun working with a group of Mexican revolutionaries who are fighting the French. When Sara requests that Hogan take her to a Mexican camp, he agrees because he had previously arranged to help the Mexican revolutionaries attack the French garrison in exchange for a portion of the garrison's strongbox if they are successful.