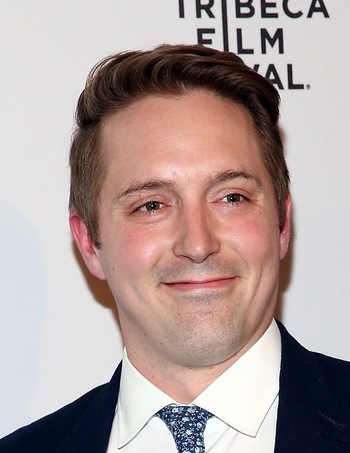 Beck came onto the show during its 39th season (2013-2014), when the show packed its cast with newbies to fill the void left behind by Bill Hader, Fred Armisen, and Jason Sudeikis. The show also hired Kyle Mooney, Beck's friend and comedy partner for their viral video sketch troupe, "Good Neighbor" but the videos the two put out didn't have the instant success that Andy Samberg's "Lonely Island" videos did.

In spite of this, Beck Bennett and Kyle Mooneynote both the first SNL male cast members to be born in the 1980s were picked to go on to the next season, while most of the new cast were let gonote just John Milhiser, Noel Wells, and Brooks Wheelan. Michael Patrick O'Brien returned to being a writer for season 40, then left the show after that. As they stayed on the show, more of Beck and Kyle's sketches were featured and Beck made a name for himself with his celebrity impressions, such as Vladimir Putin, Nick Offerman, Mitch McConnell, Javier Bardem, Guillermo del Toro, Mike Pence, and Jake Tapper.

He is married to actress Jessy Hodges.